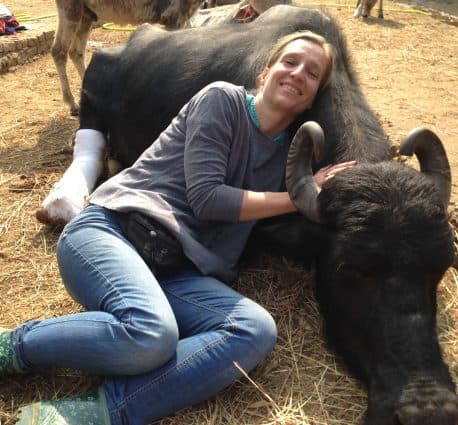 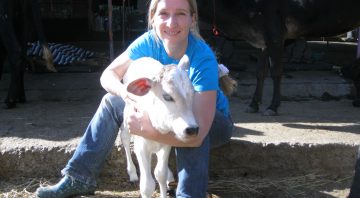 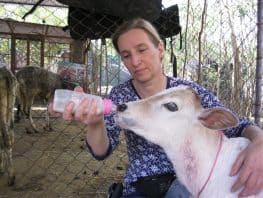 I became a vegetarian at the age of six when I saw a documentary about a slaughterhouse on TV. I had a lot of fights with my parents because of my new vegetarian diet. But my willpower has always been strong.

In my 30s I moved with my own horse to a vegetarian farm with sheep, goats, chicken, other horses, cats, and dogs. I wanted to fulfill my dream of living in peace with farm animals while using their milk and wool in a humane way. I learned how to milk animals and felt great as a farmer in the beginning but after a few seasons, I realized that we always had one problem in spring and another one in autumn.

In the spring we had to separate the mother sheep and goats from their babies or else they would drink all the milk.

In the autumn we had to get rid of the grown-ups and “useless” male sheep and goats. It was very difficult to find a place to which to send them so that they would not get slaughtered.

After a few years, I realized that my demand for their milk caused a lot of suffering to them and that vegetarianism does not help farm animals at all and even is the cause for their suffering. As a result of this realization, I gradually reduced my consumption of all animal products. In 2010, I became fully vegan.

I grew into an animal rights activist, a speaker in India and Austria in schools and organizations, a vegan writer (my book is in progress) and Youtuber. I volunteered three times at “Animal Aid Unlimited” in India, an animal hospital where I also worked in the cow area. In a village near Austria, I volunteered every Saturday at “Lamaste.” It is a vegan farm for lamas, cows and other farm animals.

By the end of 2018, I quit my job as a graphic designer in the marketing department of a big political organization and moved to Los Angeles to be with my husband.

My website is a gift to the world where I volunteer my time by creating a database for vegan businesses and sanctuaries and thereby shape a vegan future. If we humans don’t change our lifestyle we humans will go extinct and drive all other beings also into extinction.