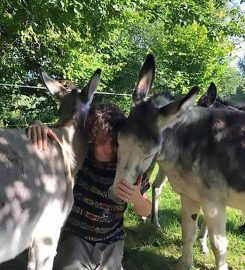 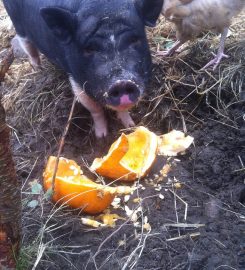 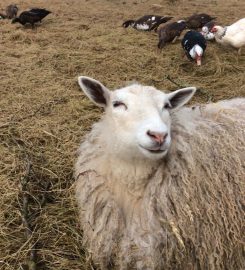 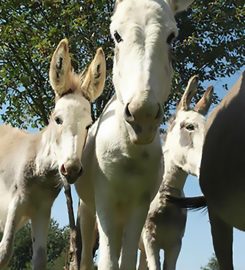 We believe in a world where animals can live free from suffering and abuse.

I still don’t know why I made that choice. But something in my heart told me to go to Denmark, so I did. I’m originally from Wales, via Spain.

I bought a cheap, derelict farm in Denmark with attached fields in an area surrounded by industrial agriculture. I brought my two rescue dogs, Rufus and Oswald, with me from Spain along with my cat Genghis, who also was a rescue from abuse.

I had read an article about how you could keep a flock of ducks in your vegetable garden to get rid of slugs and snails and thought what a fantastic idea. So, I began searching the free pages for ducks in need of a home and found a group of five ducks for free, just ten minutes away. I set off to collect them at the farm.

What I Saw Was Horrifying

It was a big farm in the middle of a grain field with huge outbuildings at the end of a very long driveway. When we pulled up in the car, there was a miserable-looking man using a chainsaw outside one of two barns. He came over and introduced himself as the owner and asked me to follow him into one of the barns to see the ducks. As I walked into the first barn building, all I could smell was manure and ammonia from urine. It was nearly pitch black.

Right in front of me were five huge horses standing together in a very small wooden enclosure. The horses had patches of fur missing from lice infestation and had a dull appearance overall. To the right of me, I could see a flock of maybe twenty sheep – very skinny, and also in a filthy wooden enclosure.

The man continued onward into the second barn and what awaited me there was pure horror! There must have been five cows chained to metal bars inches from their faces, covered in manure and with patches of sores on their bodies. There were maybe ten horses and ponies – also chained at the head. All of them were standing in small wooden pens which ran along all four walls. In the middle of the room were three more pens. In two of those stood a mix of small and large ponies all crammed together.

In one of the pens, I could see the most magnificent donkey – a female, who was black and as tall as a horse, with the most beautiful eyes. Standing next to her was her son, who was a big fluffy ball of a black baby donkey. They were both chained to a metal ring and like all of the animals at this farm they had never seen the daylight.

The owner was only using the animals to make money. He would breed the females over and over, and sell the babies at markets and online. When the females were worn out, he would slaughter them. And he was doing it to all types of animals – pigs, sheep, horses, mules, ponies, donkeys, geese, ducks, chickens.

As I drove away with the family of five ducks, I knew I would be going back to try and free some of his slaves.

Over the next few weeks, I set about trying to persuade the man to let me take the female donkey and her son, who would later be named Aslan, and give them sanctuary at my own farm. But he refused. I kept insisting and finally, he allowed me to take Aslan, but not his mother, for a small fee.

Two weeks later I was back at his house of horrors to collect Aslan. It broke my heart to have to leave both his mother and all those other animals in that monster’s care but I had no choice. I had contacted all of the animal welfare groups and animal protection agencies here in Denmark but was told there was nothing legally they could do to stop this kind of animal abuse.

The feeling of being powerless and unable to help get my mind going. I wanted to find out if there was ANY place where animals rescued from places like this would be able to find sanctuary in Denmark. Sadly, I found out that there was only one other place, which had its own struggles with getting started and with the number of animals they could help. I wanted to do more. I wanted to change the abused animals’ lives and be their voice. I decided to start a farm sanctuary – the very first of its kind in Denmark.

Fields of Freedom is Born

Fields of Freedom was registered as a non-profit organization in 2015 and Aslan was our first rescue. His story would help get support for my mission to be a voice for the animals. The first farm was located in an inaccessible area of the country, which made it hard for volunteers to visit. In late 2015, after many long nights searching the Internet, I found an inexpensive old farm with a thatch roof that had stood empty for more than four years.

There wasn’t much left of the house building, but the stables were big and dry. Best of all, it had over 10 acres of the most fantastic and beautiful fields and woodlands. This would be the place where the sanctuary could flourish, and I could continue my mission for the animals.

Over the next two years, I worked on building up the sanctuary by making fences and sun/rain/wind shelters out in the fields. I did a lot of cleaning and clearing of all the farm buildings belonging to the sanctuary. Volunteers came from many different countries and helped out with the work.

Today, Fields of Freedom is home to more than 70 animals of all different kinds. Cows, donkeys, sheep, pigs, geese, chickens, cats and dogs. They all have one thing in common: they were all previously abused and neglected, on their way to the slaughterhouse, and in desperate need of sanctuary and love.

Moving the Animals to Safety

The endless rains and storms of Summer and Fall 2017 caused the farm to become structurally unsafe, with the old walls and roofs in the stables in danger of collapsing on top of the animals. The buildings could not be repaired, and the landlord we were renting from was not interested in making any repairs.

On top of this, the animals were attacked by the neighbors and two pigs suffered a terrible death from poisoning. Empty pouches of rat poison were found in the donkeys’ hay out in the fields. We had called the police to the farm on three separate occasions but they couldn’t do anything to protect the animals. The video security cameras we had set up kept getting smashed. Because of the danger of the situation, the animals had lost half of their grazing areas.

In late November 2017, we launched a campaign to move the animals to a new, safe location. Thousands of kind-hearted people from all over the world responded, and in late February we moved to the new farm. It’s a fixer-upper, for sure. It needs a LOT of repairs and replacements in order to make it a farm that is sturdy, durable and safe for the animals.