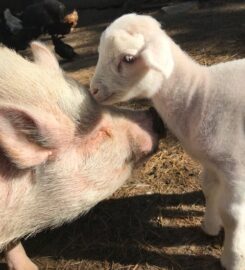 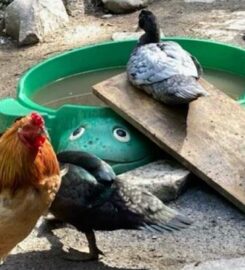 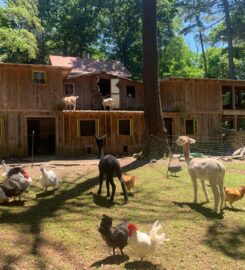 A place where animals are friends, not food.

And-Hof was started by Kurt Andernach in 2010. Kurt had a dream to start And-Hof inspired by the animals he knew and loved growing up in his hometown of Bavaria. After moving first to Chicago and then New York City, he kept this dream in the back of his mind, even after a success career as an interior designer and architect for such clients as Diane von Furstenberg. In 2002, he began to plan his move to the country.

His search took him first to Coxsackie and then to Leeds, where he found a 50-acre plot of land deep in the woods where he began to plan the farm sanctuary he would one day create. It was Hank, a runaway rooster, who finally put his plan in motion in the summer of 2010. And a year later, And-Hof Animals, Sanctuary for Farm Animals + Permaculture was born. In 2016, the farm received its official 501(c)3 status. Today, the farm is home to over 160 turkeys, 100 chickens, 25 ducks, five goats, four sheep, three pigs, and two very loud geese.

Today he is also joined by a very talented staff of veteran farm caretakers and veterinarians who keep his animals healthy and happy using holistic and homeopathic remedies whenever possible.

Our mission begins with giving abused and neglected farm animals a safe and caring home but goes further to create an environment where people, animals, and nature live in balanced co-existence. Rather than being contained in pens, our animals enjoy as much freedom and autonomy as is safe. We then nurture them to follow their instinctual habits and build on that to create a healthier ecosystem:

Never could I have imagined, when Henry and Henrietta moved into the little wood shed behind my house, that the legacy of these 2 Birds would one day evolve into a save haven for abused and neglected animals. A place where we dedicate ourselves to their recovery and advocate for veganism as the quintessential vehicle to stop animals abuse; here we promote a lifestyle free of animal products as a fundamentally healthier way of life.

At And-Hof we recognize that animal rescue and animal advocacy is part of a much larger, complex ecology. Understanding the consequential impact of our work on the environment is paramount. Rescuing one life form at the expense of another creates a paradox. However, learning how different life forms can sustain each other, creates a profound environment of balanced coexistence for flora, fauna and humans alike!

To begin with, I believe in providing the animals with a maximum of autonomy and freedom within a framework that promotes safe co-habitation. Indeed, we have pens and barns on the farm, but most of the times the gates are wide open and (almost) everybody is encouraged to seek out for themselves the place they want to live and the company of animals they like the best.

A free animal that is mentally stimulated and is encouraged to indulge in its instinctual habits all day long, is less likely to cause trouble, or get sick, than an animal that is confined to a square pen with nothing or little to keep it occupied. And-Hof Sanctuary is the perfect place to provide stimulation for animals and people alike!

Unlike traditional farms, the sanctuary is located I mile deep inside an intact, undisturbed forest. Logging acres of century old trees and bulldozing over intact, undisturbed eco systems only for the sake of establishing conventional pasture land is not an option. Nor is it necessary. We log trees very selectively to open up a dense canopy of leaves to allow sufficient sunlight to grow Silvo Pastures. Any tree is evaluated before it is being logged. Specie, age, height, health and the nutrients it provides to the forest’s flora and fauna are taken into account before it is removed.

At And-Hof Animal we strive to manage the animals, the forest, the people as close to zero waste as possible and to hold the carbon foot print to a minimum! Whether it is the trees we mill onsite for construction wood, fence posts and mulch, or the rocks in the ground we use among foundations, retaining walls, dry wells, to only name a few applications.

The endless wheel barrel caravan of animal manure is turned into rich, fertile soil while the heat generated in the composting process can be used to keep a Chicken coop well temperatured and imbedded water storage tanks from freezing during the cold winter months. Rainwater is channeled into large water reservoir ponds to the delight of our Water Fowl and Pigs alike. Even many of the man-made products on the farm that have outlived their original purpose, will often find a new life by being re-purposed.

We maintain the forest with heavy equipment indeed, but not the kind you need a driver’s license for. Our Goats nourish on the undergrowth of the forest, removing brush and invasive growth that cut the sunlight and shade the forest floor. Our 7 Pig strong rototiller/bulldozer force is most proficient in ground preparation for seeding. With the greatest delight their noses till acres of land, thereby aerating the soil, digging under the nutrient rich top soil layer and in the process kill the roots the Goats overlooked or didn’t get to. Imbedded rocks get dislodged, which saves us a lot effort when pulling them out of the ground and collecting them.